12 February 2019: Iconic Victorian Painting offered for sale for the first time in 135 years 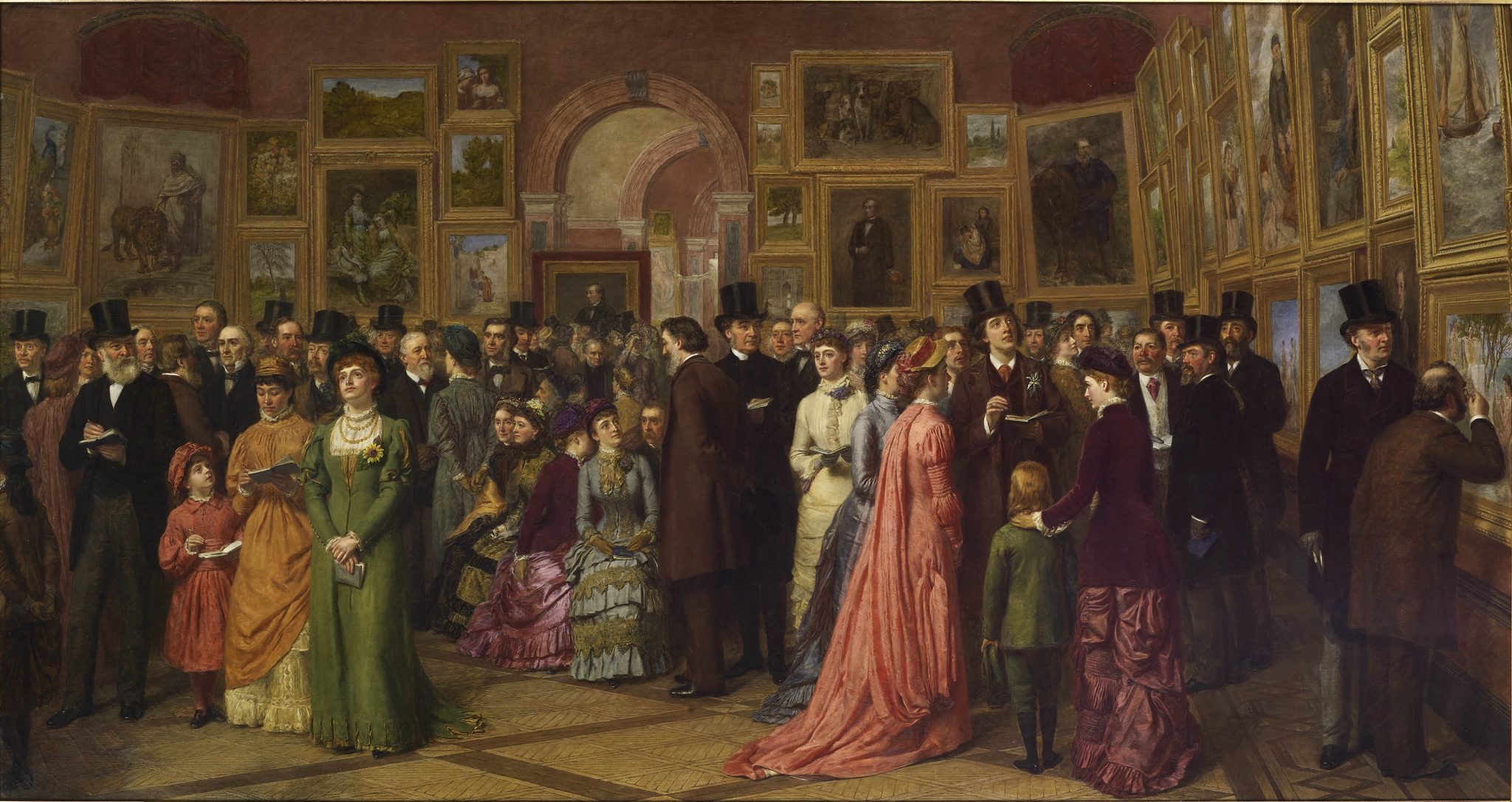 For the first time since its original purchase in 1883, The Private View at the Royal Academy, 1881, by William Powell Frith, RA (1819 – 1909), one of the most popular artists of the Victorian age, is to be offered for sale.

This historically important record and celebrated satire is the artist’s response to the Aesthetic Movement which challenged the artistic tradition that Frith and his circle held dear.  William Powell Frith was a stalwart of the Victorian art scene, his ambitious scenes of modern life attracting huge public interest and achieving the highest figures ever paid at that time to a living artist.

The Private View is considered to be Frith’s last great panorama.  When it was shown at the Royal Academy, it was the artist’s sixth painting to require a guard and a rail to protect it from the crowds who flocked to see it.  The painting was acquired from the artist by Alfred Pope, founder of the famous Eldridge Pope Brewery in Dorset, and has remained in the Pope family ever since.  It is the last of Frith’s renowned scenes of modern life to remain in private hands.

Accompanying the sale of the painting by Martin Beisly Fine Art is the publication of new research by leading authorities on Frith, Mark Bills and Rosie Jarvie.  For the first time, this tells the story of the painting’s evolution, including details of sittings with the influential figures selected by Frith for the painting and their careful placement, along with media coverage generated in anticipation of the picture’s unveiling.

The research also uncovers subsequent correspondence between Alfred Pope and the artist in 1895, in which the painting’s owner suggests that, in light of the scandal around Wilde’s high profile trial, Frith might paint out Oscar Wilde. Clearly, Wilde’s likeness was nonetheless retained and the painting became an important image in the iconography of Oscar Wilde.

Commenting, Mark Bills says: “Hugely popular with the Victorian audience, The Private View at the Royal Academy, 1881 is also a key record of art criticism and social evolution.  This subject allowed Frith to celebrate the artistic hierarchy of the Academy, providing a stage for its central protagonists along with leading political and cultural figures of the day, and to gently mock those who offered a challenge to it.”

Martin Beisly, Director of Martin Beisly Fine Art, says: “When exceptional Victorian pictures such as this appear on the art market, they are often discoveries, works hidden away then overlooked before being declared ‘lost’.”

“In contrast, we assume all the great, well-known and well-loved pictures, the images of which are familiar to us, are safely enshrined in public collections, carefully researched and fully catalogued like The Derby Day in Tate Britain or Ramsgate Sands, which is part of the Royal Collection.”

“It is remarkable that this celebrated picture, frequently requested for loans to key exhibitions – including most recently the seminal exhibition at the Royal Academy to mark its 250th anniversary and the forthcoming major bicentenary exhibition, William Powell Frith: The People’s Painter at The Mercer Art Gallery, Harrogate – is not only still in private hands but has been in the same family since it was purchased from the artist. The painting is in excellent condition, the canvas unlined and in its original frame with inscribed key.”