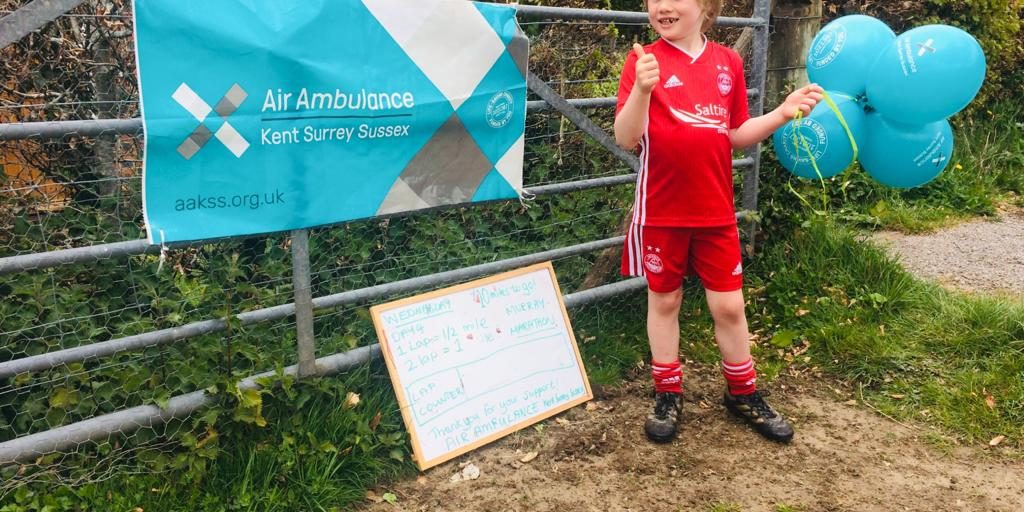 Five-year-old Murray Miles from Chelwood Gate has been selected as a finalist for the BBC Radio Sussex Make A Difference Heroes Awards. He is one of three finalists for the Young Achiever of the Year category which recognises the achievements of people under the age of 18 who have demonstrated maturity beyond their years.

Murray’s world was turned upside down when his Dad, Noel, was in a serious motorbike accident in September 2019, resulting in life changing injuries. Despite the challenging time he was having, Murray decided to fundraise to thank Air Ambulance Kent, Surrey, Sussex (KSS) for helping to save his Dad’s life.

Inspired by his Dad, a sporting enthusiast who, prior to his accident, had taken part in over 25 marathons and six Ironman triathlons, five-year-old Murray set himself the challenge of running a marathon over five consecutive days as part of the 2.6 Challenge. In April 2020, he completed the 26 mile run in five hours 31 minutes. He has raised over £10,000, far exceeding his target of £1,000.

In September 2020 he took part in a charity horse ride which raised £2,000 for KSS. He was the youngest participant, completing nine miles on a pony in just under two hours.

Emily Miles, Murray’s Mum said: “We are so excited that Murray has been selected as a finalist for this BBC radio award. He is incredible – he has been through a very difficult time and yet has achieved so much for such an amazing, life-saving charity. We were informed by Just Giving that, for the month of April, Murray was amongst the top 3% of its fundraisers. People are still making donations and we really appreciate all the support he has received.”

Lynne Harris, Executive Director of Income Generation, KSS added: “We are so grateful to Murray for continually fundraising for KSS, particularly during such a challenging year for our charity. His positivity and energy never cease to amaze us. Murray is a real community hero and an inspiring young ambassador for KSS. He thoroughly deserves this recognition.”

Mark Carter, BBC Radio Sussex Acting Managing Editor and Presenter said, “This has been a year like no other. It’s been such a difficult few months for so many people but on the positive side, it’s seen so many acts of kindness in the local community. Now, perhaps more than ever, it’s so important for us to recognise those who’ve gone the extra mile.”

Winners of the BBC Radio Sussex Make A Difference Heroes Awards, now in their 10th year, will be announced in a special programme at 8pm on Monday 30th November 2020.