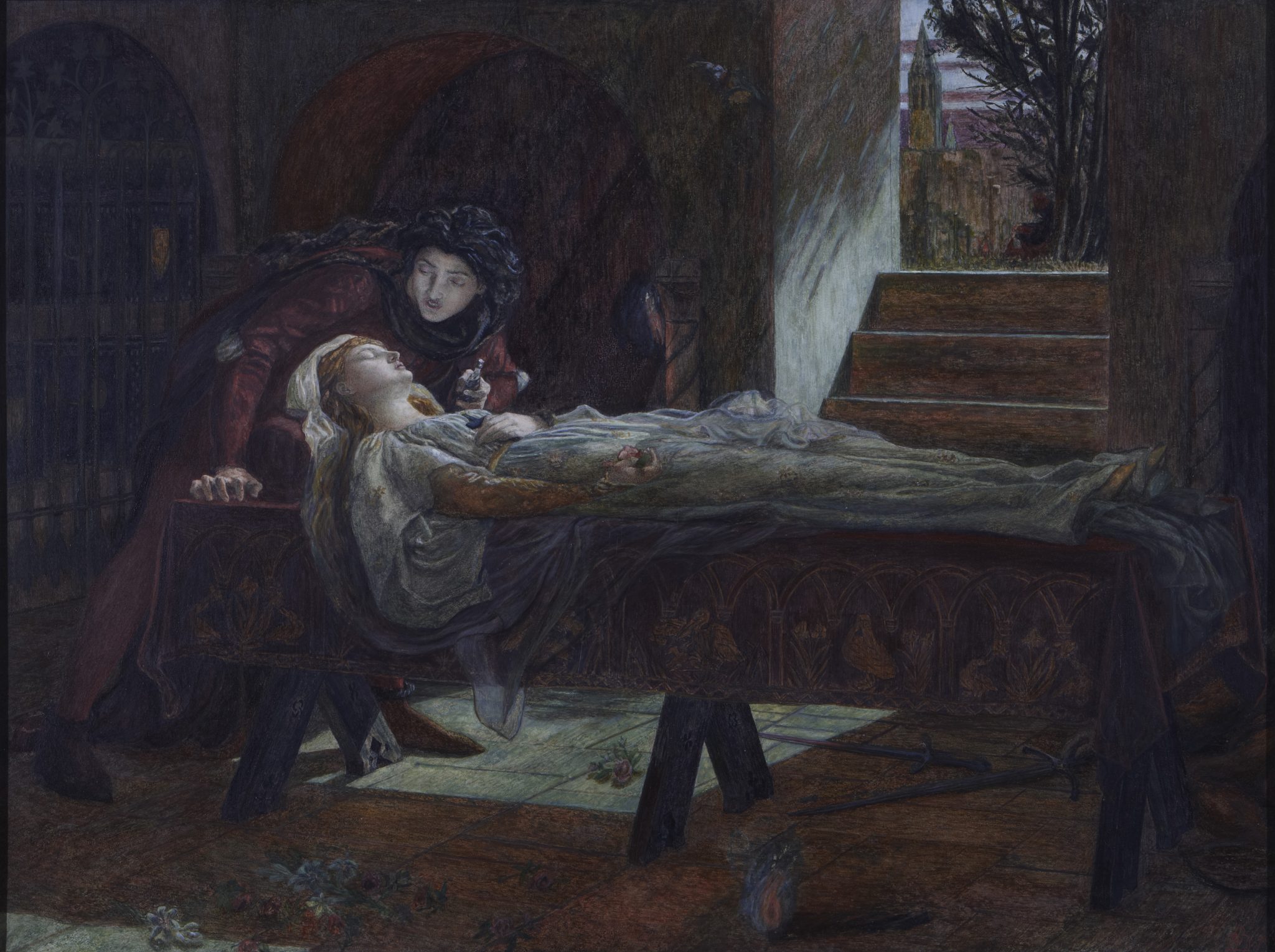 Uncommon Power’: Lucy and Catherine Madox Brown is the first exhibition dedicated to the life, art and feminist legacies of sisters Lucy Rossetti (1843-1894) and Catherine Hueffer (1850-1927).

Commonly referred to as the daughters of Ford Madox Brown (1821-1893), these two creative women grew up at the heart of the Pre-Raphaelite world and, as this exhibition demonstrates, became talented, professional artists in their own right.

From infancy, the two sisters frequently sat for their artist-father, modelling for some of his most celebrated works including Stages of Cruelty (Study for the Child, 1857, on loan from Birmingham Museums Trust) and The Pretty Baa-Lambs (1852, on loan from Ashmolean Museum, University of Oxford). Both Lucy and Catherine soon joined Ford Madox Brown in his studio, where they were trained alongside their brother Oliver and fellow artist Marie Spartali Stillman. Following their development from models to practitioners, ‘Uncommon Power’ considers how each sister’s art both manifested and moved beyond their father’s teachings. As one writer from the Magazine of Art revealed, Ford Madox Brown himself ‘freely admitted’ that his use of colour ‘was greatly improved by the more opulent and refined colour-sense of his daughters’.

The late 1860s to early 1870s marked a pivotal moment in the sisters’ careers, in which they began to formally exhibit their art in London, Liverpool and Manchester. Featuring a selection of these (now rarely exhibited) works, from both public and private collections, the exhibition explores how each sister interacted with the British art world. In 1869, Catherine Hueffer’s At the Opera (Private Collection) was hung in a prestigious location ‘on the line’ at the Royal Academy of Arts’ Summer Exhibition. Lucy Rossetti’s The Tomb Scene from ‘Romeo & Juliet’ (1870, on loan from Wightwick Manor, National Trust), was equally well received by the critics. When exhibited at the Dudley Gallery in 1871, the watercolour was described by a journalist from The Times as showing ‘uncommon power and warrants high expectations of the young artist’s future’.

Loans including Ford Madox Brown’s The Nosegay (1865, The Ashmolean Museum, University of Oxford) and Dante Gabriel Rossetti’s portrait of his sister-in-law (1874, Private Collection) demonstrate how Lucy and Catherine defined themselves as both women and artists within Pre-Raphaelite codes of femininity. Contemporaries of the Madox Brown sisters described how the young women dressed in ‘the height of artistic and aesthetic fashion’ and presented themselves ‘like a Burne-Jones picture’.

Finally, the exhibition considers how the sisters engaged with and portrayed other prominent creative and intellectual women, including – among others – the novelist Mary Shelley and radical poet and theorist Mathilde Blind (portrait on loan from Newnham College, University of Cambridge). With Lucy Rossetti listed as a signatory of an 1889 ‘Declaration in Favour of Women’s Suffrage’, ‘Uncommon Power’: Lucy and Catherine Madox Brown also explores how the sisters’ lives and work were shaped by wider socio-political developments, including emergent feminist movements.

While the biographies of both their father and brother were included in the Dictionary of National Biography shortly after their respective deaths, entries on Lucy and Catherine Madox Brown were not added until the early-21st century. This pivotal exhibition shines new light on the art, life and ideas of these Pre-Raphaelite sister-artists.

“One of the extraordinary things about Lucy and Catherine Madox Brown’s story is the way their families have safeguarded their works – handing them on from generation to generation until the time was right to bring them back to critical attention. This exhibition marks that moment. ‘Endowed with rare sympathies for the beautiful’ thanks to their Pre-Raphaelite childhoods, and unafraid to push the boundaries, the art they produced was often described as poetic and remarkable and considered exciting in its time. This exhibition aims to make good on that promise, and reinstate their body of work back into the annals of Pre-Raphaelitism.”

“In 1876, both Lucy Rossetti and Catherine Hueffer featured in Ellen Creathorne Clayton’s English Female Artists, a two-volume ‘roll call of honourable names’ and artist biographies. Despite this, they remain relatively unknown today. Exploring their life, art and legacy, this exhibition, and its accompanying publication, places these Pre-Raphaelite sister-artists centre stage.”

“‘Uncommon Power’: Lucy and Catherine Madox Brown builds upon a programme of temporary exhibitions at Watts Gallery – Artists’ Village dedicated to the discovery and exploration of significant women in nineteenth-century British art and culture.”

“Inspired by the extraordinary life and legacy of our co-founder, Mary Watts (1849-1938), through our research, exhibitions and events, we invite visitors to rediscover artists from our past, looking through a 21st century lens.”