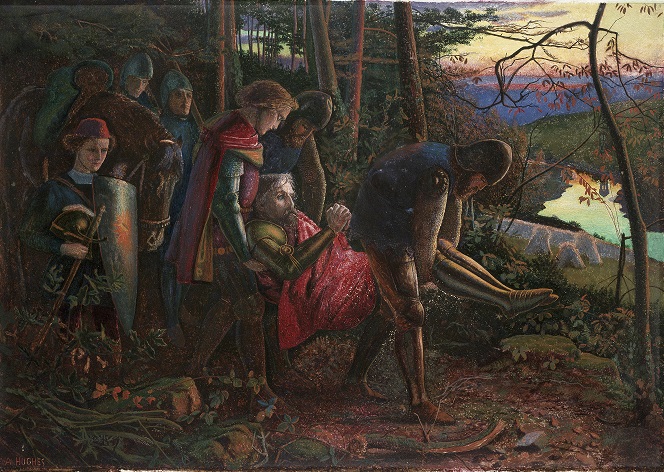 This Spring, visitors to Watts Gallery have a rare opportunity to see highlights from the Ashmolean Museum’s internationally renowned collection of Pre-Raphaelite drawings and watercolours.

Pre-Raphaelite Treasures (opening 8 March) offers an intimate glimpse into the world of the Pre-Raphaelites, presenting exquisite works by key artists from the movement including Dante Gabriel Rossetti (1828-1882), Edward Burne-Jones (1833-1898) and Elizabeth Siddal (1829-1862).

The exhibition includes works of extraordinary beauty, from the portraits they made of each other, to subjects taken from history, literature and landscape. Displayed together, these drawings and watercolours reveal the impressive range of styles, methods and media used by the Pre-Raphaelite Brotherhood and their associates, showcasing their individual skills, collective creativity and revolutionary thinking about art and society which was to have a lasting impact on British art history.

The exhibition will also showcase a selection of extraordinary works on paper by Pre-Raphaelite contemporary G F Watts (1817-1904) from Watts Gallery’s own collection.  Watts’s long career overlapped and connected with that of the Pre-Raphaelites, and his drawings reveal his knowledge of their art and the influence of their way of thinking. His output on paper included striking portrait heads such as his study of the young Arthur Prinsep (c.1854-5); refined and freely drawn figure studies like his swirling sketch for A Story from Boccaccio; grand large-scale finished chalk drawings including his study for St John for St Paul’s Cathedral (c.1864-89); and delicate landscape watercolours such as his panoramic view of the Carrara Mountains. Treasures in their own right, these pictures are rarely shown due to the fragility and light sensitivity of works on paper.

Together, the works reveal a new side to these artists, who painted many of the most recognisable pictures in the history of British art. Pre-Raphaelite Treasures shows how these illustrious artists experimented with style, technique and subject matter to create outstanding and seldom-seen masterpieces in pencil, pen, coloured chalks and watercolour paint.

In 1848 seven young artists, including John Everett Millais (1829-1896), William Holman Hunt (1827-1910) and Dante Gabriel Rossetti (1828-1882), resolved to rebel against the academic teaching of the Royal Academy of Arts. They proposed a new mode of working which would depart from what they considered the ‘mannered’ style of artists who came after Raphael (1483-1520). The Pre-Raphaelite Brotherhood (PRB) set out to paint with originality and authenticity by studying nature, celebrating their friends and heroes, and taking inspiration from the art and poetry about which they were passionate. This innovative approach and their characteristic styles influenced younger generations of British artists well into the 20th century.

Pre-Raphaelite Treasures begins by introducing the Pre-Raphaelite Brotherhood and their circle through small, affectionate sketches the artists made of one another. These include Burne-Jones’s caricature of himself and his friend May Gaskell (1893-8), and reciprocal pencil portraits made by close friends Millais and Charles Allston Collins (1828-1873) in 1850, both proudly signed ‘PRB’.

The exhibition goes on to explore how, by working on paper, these artists were able to experiment with both their methods and materials, drawing in pencil and pen, chalks and pastel, and even gold paint (Hope by Burne-Jones, 1893). Artists of the Pre-Raphaelite movement came from a wide range of artistic backgrounds and created drawings in a variety of styles and techniques over the course of their careers. Millais and Holman Hunt had been through the rigorous training of the Royal Academy Schools, while Rossetti and Burne-Jones were relatively untrained and arguably more original as a result. Burne-Jones’s works in the show demonstrate his versatility, ranging from a pen-sketched caricature, a richly textured chalk portrait, and minutely detailed poetry illustrations to bold stained-glass designs. John Ruskin (1819-1900) came from a different tradition again, that of the amateur watercolourist, and his nature studies, such as Study of a Velvet Crab (c.1870-1), are miracles of acute observation. In contrast, watercolours by John Brett (1831-1902) and Simeon Solomon (1840-1905) resemble oil paintings in their intensity of colour and rendition of light.

The works on display also give insights into iconic Pre-Raphaelite individuals and their relationships. Dante Gabriel Rossetti’s early drawings of Elizabeth Siddal reveal an artist wholly captivated by his model and future wife (they married in 1860), while Siddal’s drawing Two Men in a Boat and a Woman Punting (c.1853-5), is a witty variation on Rossetti’s Boatmen and Siren. In her scene the man pleads with the ‘siren’ who uses her pole to push him away with a furious expression on her face. Solomon’s painting of two men engaged in Christian ritual, Two Acolytes Censing, Pentecost (1863), which appear to be portraits, is particularly poignant given the artist’s successful early career was cut short by the homophobia of Victorian Britain when his homosexuality became public.

Other themes explored through this exhibition include:

Two Artists in Residence have been commissioned to respond to the Pre-Raphaelite Treasures exhibition:

Born in Nairobi to a Kikuyu mother and British Kenyan father and raised in the Arabian Gulf, Phoebe Boswell is a multi-disciplinary artist who lives and works in London. She creates layered, deeply immersive installations to centre and amplify histories which, like her own, are often systemically marginalised.

Still life and portrait artist, Sarah Thien, received her classical training at the London Fine Arts Studio and now works from her studio in Farnham. Her work is inspired by the beauty of the Dutch and Belgian Old Masters.

“The Pre-Raphaelites are among the nation’s favourite artists, whose bold and beautiful paintings are widely recognised. However, few are familiar with their exquisite drawing work. True to the avant-garde spirit of this leading nineteenth-century art movement, Pre-Raphaelite Treasures will reveal the great creativity and versatility of the Pre-Raphaelite artists and their circle. It also shines new light on affinities with G F Watts’s drawing practice, from experimentation with styles and materials, to sources of inspiration and concepts of beauty.”

“Our programme is all about partnerships, so we are thrilled to be supporting this exhibition which will see such important works from the Ashmolean Museum displayed alongside treasures from Watts Gallery’s own collection.”

“Watts Gallery – Artists’ Village is delighted to be able to display a varied range of drawings and watercolours from the Ashmolean Museum, Oxford, thanks to the generosity of the Weston Loan Programme, and to take this opportunity to also show a selection of rarely seen works on paper by G F Watts from our own collection. Through the exhibition, Watts Gallery – Artists’ Village will offer a contemporary lens on the art of some of the UK’s most recognised artists in its role as a centre for the study of nineteenth- and early twentieth-century art.”

“I am also thrilled to be able to welcome Artists in Residence Phoebe Boswell and Sarah Thien during the exhibition and look forward to their responses to the works in the exhibition.”

Pre-Raphaelite Treasures: Drawings and Watercolours from the Ashmolean Museum opens at Watts Gallery on 8 March (until 12 June).  For the run of the exhibition, Watts Gallery – Artists’ Village will be focusing on all things drawing related, with an exhibition of contemporary drawing by Members of the Society of Graphic Fine Art in Watts Contemporary Gallery and a programme of courses and activities for all ages and abilities.

Image: Arthur Hughes, The Knight of the Sun, 1860-61, watercolour and body colour on paper © Ashmolean Museum, University of Oxford