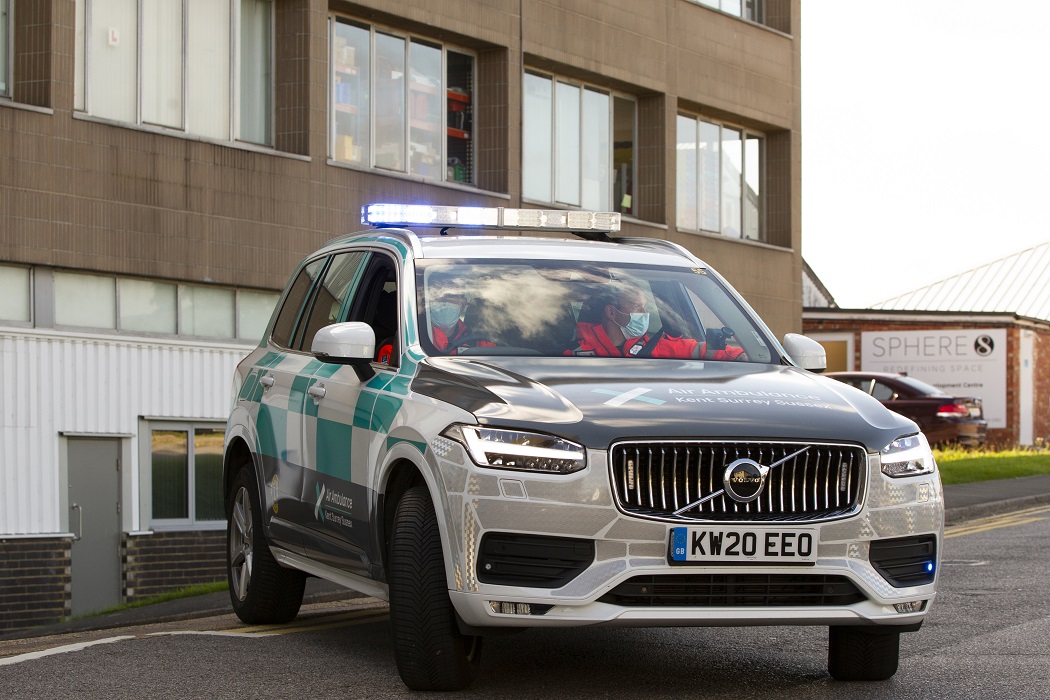 Air Ambulance Charity Kent Surrey Sussex (KSS) is appealing to members of the public to help raise much-needed funds to replace one of its rapid response vehicles. The charity has set itself the goal of raising £21,250 in just one week, from 29th November to 5th December. Donations made to the campaign will be doubled to raise a total of £42,500 – the cost of replacing one of its rapid response vehicles. This is thanks to the generous support of match funders including a number of organisations and philanthropists from across the region.

In addition to operating three helicopters, KSS relies on four rapid response road vehicles which are vital for getting its specialist doctors and paramedics to the scene as quickly as possible when bad weather prevents the helicopters from flying, or when the location of the incident makes it more beneficial to attend in a car. So far this year KSS’s rapid response vehicles attended over 960 incidents, and were essential in enabling KSS to deliver its life-saving service 24/7, ensuring the best possible outcomes for patients.

Former patient Warren Porritt collided head-on with a car whilst riding his scooter down a country lane in Marden in 2016. As the incident took place close to KSS’s former base, a rapid response vehicle was the quickest way to get the team on scene. Warren required critical care from KSS’s doctor and paramedic team, including a thoracostomy at the roadside to reinflate his lungs. He was then transferred to King’s College Hospital in the helicopter.

Warren said: “My kids wouldn’t have a dad if it weren’t for KSS. The rapid response vehicle meant that the team could get to me quickly, bringing critical interventions directly to the scene, which saved my life. I’m so grateful to the team who were there to help me that day and to all of the incredible people who support KSS, who ultimately made my care possible. I’m now a volunteer for KSS and want to do all that I can to support this incredible charity”.

David Welch, CEO of KSS, said: “I am thrilled to be launching our KSS Rapid Response Campaign which is the first ever week-long campaign we have run of this nature. Together with our supporters we aim to raise funds to replace one of our rapid response vehicles, a vital part of our service, ensuring we can be there 24/7, whatever the weather, for patients most in need of our critical care, like Warren.

For every £1 donated by a member of the public towards the campaign, KSS will receive an additional £1 through match funding – this is a fundamental part of the campaign which we’re immensely thankful for. It means that any money you can donate will be doubled to help us reach our target of £42,500.

We fight every day to save lives – we’re a vital part of your communities, your lives and your safety and together with your support we can ensure we’re there for every patient who needs us. Thank you.”

The KSS Rapid Response Campaign launches on Monday 29th November and runs till Sunday 5th December. Donations made as part of this campaign will be doubled thanks to match funding from Barretts, Fidelity International, White and Sons and many generous trusts, foundations, businesses and philanthropists located throughout the region.

KSS’s rapid response vehicles are typically replaced every four years and one of their current fleet needs to be replaced early in the New Year.

KSS is an award-winning charity that must raise over £15M each year to deliver its life-saving service 24/7 to the most critically ill patients in Kent, Surrey and in East and West Sussex, and 88% of this coming from public donations and fundraising. For further information about KSS and its Rapid Response Campaign, or to make a donation, please visit aakss.org.uk.