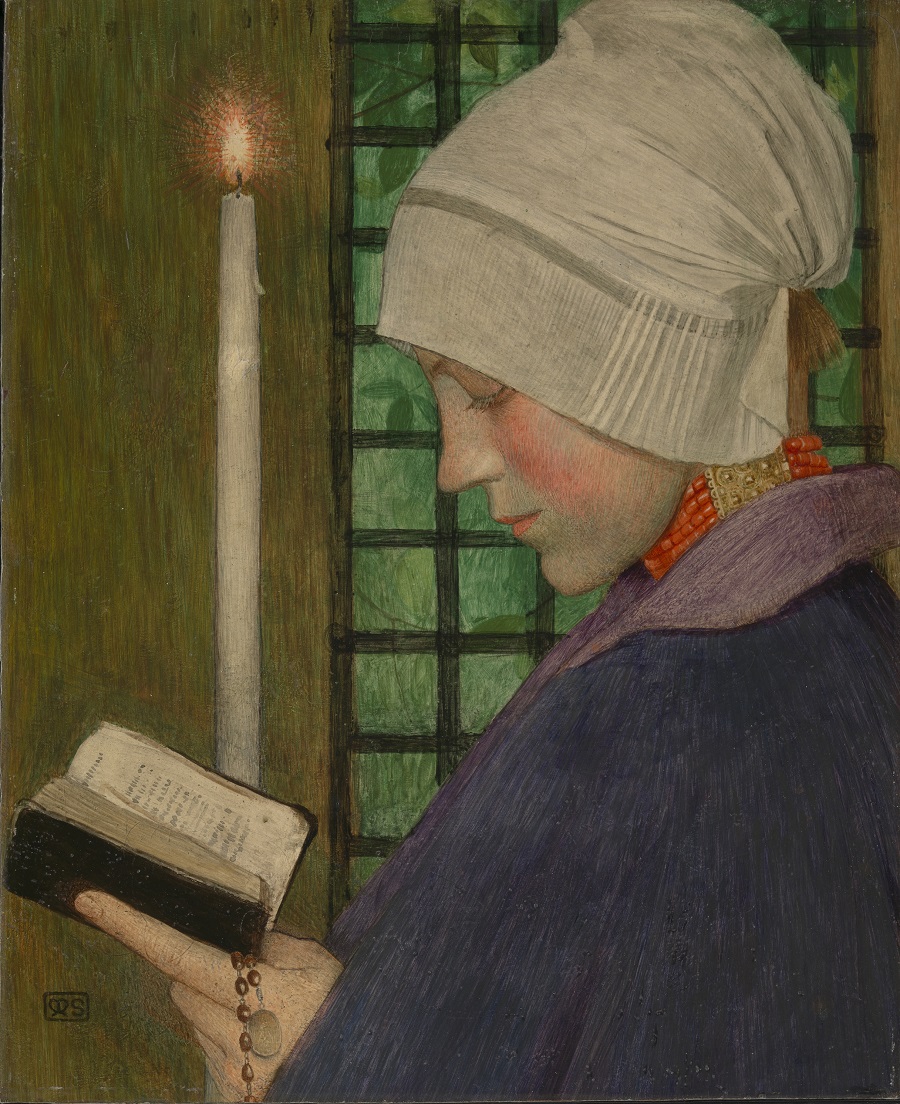 Dreams and Stories: Modern Pre-Raphaelite Visionaries opening at Watts Gallery on 18 October (until 26 February 2023) brings together paintings, works on paper, ceramics and more created by British artists working during the late 19th and early 20th centuries to explore how this period was central to the development of modern art – in particular, to the evolution of Surrealism, the international movement that united the worlds of dream and fantasy with everyday life and flourished following the First World War.

Featuring 38 major paintings by artists including Frederick Cayley Robinson (1862-1927), Simeon Solomon (1840-1905), William Shackleton (1872-1933), Thomas Cooper Gotch (1854-1931), Evelyn De Morgan (1855-1919) and more, the exhibition will show how these artists continued to work in the Pre-Raphaelite ‘style’, and how they found in it a way of responding to new fields of study such as psychology which, for the first time, gave insights into dreams and the subconscious.

Although less familiar today than other artists from this era who sought to radically break ties with their predecessors, Dreams and Stories will seek to re-establish the role of these Modern Pre-Raphaelites in the evolution of modern art. Drawing from new research by Dr Alice Eden, the exhibition will reveal how looking back allowed these artists to move forward and explore the modern world.

The original group disbanded after a few years but over the next decade their style, sentiment and subjects altered British Art and gained followers. This lead to a second wave of artists who explored the ideas of colour harmonies and the art for art’s sake in which art could just be beautiful without needing to teach the viewer anything.

By the 1880s a new set of artists including Frederick Cayley Robinson, Evelyn de Morgan and Marianne Stokes (1855-1927) continued the style, finding in it a way of responding to contemporary themes.  In their paintings the past and the modern world collide, with modern objects like aeroplanes, streetlamps and sewing machines appearing within mystical landscapes or ecclesiastical interiors. Familiar fairy tale imagery is suffused with a sense of the surreal, reflecting new interests in psychology and Spiritualism. Saintly representations of women are reconsidered alongside the emergence of the modern woman and the Suffrage Movement.

Dreams and Stories: Modern Pre-Raphaelite Visionaries examines this movement thematically, opening with a section exploring the Pre-Raphaelite Revivals. Works by the original member Dante Gabriel Rossetti (1828-1882) can be seen alongside second wave Pre-Raphaelite artist Walter Crane (1845-1915) and Modern Pre-Raphaelite artists. Eleanor Fortescue Brickdale’s (1872-1945) painting The Guardian Angel (1910) demonstrates how this last wave of Pre-Raphaelites fused modern technology with Pre-Raphaelite style. The painting was made in memory of Charles Rolls (1877-1910), a pioneering aviator and motorist and one half of the Rolls Royce Company. He was the first Briton to be killed in an aeronautical accident with a powered aircraft when the tail broke off his Wright Flyer aeroplane during a flying display in 1910. Below the main image Brickdale includes a homage to the heroes of aviation in a predella (bottom panel on an altarpiece) featuring images of Leonardo Da Vinci (1452-1519) with a model aeroplane, a contemporary pilot in uniform and Icarus, the Greek mortal famous for having flown too close to the sun.

In Symbolism and Spiritualism the exhibition explores the ways in which these artists were part of the European Symbolist Movement and the importance of religion, Spiritualism and the occult to this movement. Evelyn De Morgan’s Evening Star over the Sea (c.1910-14) exemplifies how artists sought to visualise the invisible forces that could not be explained by science.

The Face of a Woman: Female Artists, Activism and Representation focuses on new images of women and the work of female artists, many of whom for the first time were able to access artistic training on the same basis as men. An exquisite pair of female saints copied after Sandro Botticelli by Christiana Herringham (1852-1929) demonstrates the rise of saintly images of women at a time when saints such as Joan of Arc were adopted by the Suffrage Movement as an icon of strength and tenacity.

The last section, Dreams and Psychology, looks at the ways artists were inspired by interest in dreams and the idea of the subconscious. Frederick Cayley Robinson’s remarkable illustrations for Maurice Maeterlinck’s fairy tale play for adults, The Bluebird (1909), are hauntingly beautiful and unnerving, paving the way for later Surrealists artists.

The exhibition includes works by both G F Watts (1817-1904) and Mary Watts (1849-1938). G F Watts moved towards Symbolism in his later works showing similar interests to the Modern Pre-Raphaelites including enthusiasm for the unexplained. In 1884 he joined Society for Psychical Research. Formed in 1882 to conduct scholarly research into human experiences that challenge science including hypnotism, séances, telepathy and paranormal activity, the Society is still active today.

Mary’s work is represented by her snake pot which was one of the first designs she created for the Potters’ Arts Guild, staffed by the people of the local Compton community, to be sold in Liberty’s. Visitors can extend the exhibition beyond the gallery by exploring Mary’s ceiling tiles at Limnerslease celebrating world religions and nature, and her remarkable designs for the chapel which capture the essence of the Modern Pre-Raphaelites.

“It is remarkable that so many of the artists in this exhibition have gone under the radar for so long as their works are exquisite and complex.  The exhibition and new research by Dr Alice Eden allow us to gain a far better understanding of the art produced in the period 1880-1930 of which Modernist art, that now dominates the canon of art, was only one of many types in that time.”

“This exhibition presents an exciting opportunity to shine a light on a group of lesser-known artists who paved the way for experimental movements such as Surrealism. Responding to the modernity of the time, these magnificent works in a variety of media and their sense of escapism, hold a keen relevance today. We are delighted to bring these works to Watts Gallery – Artists’ Village.”

Dreams and Stories: Modern Pre-Raphaelite Visionaries opens at Watts Gallery on 18 October (until 26 February 2023).   The exhibition is made possible by loans from Leamington Spa Art Gallery & Museum, Tate and public and private collections across the UK.

A programme of special events will accompany the exhibition.  For further information: www.wattsgallery.org.uk/whats-on