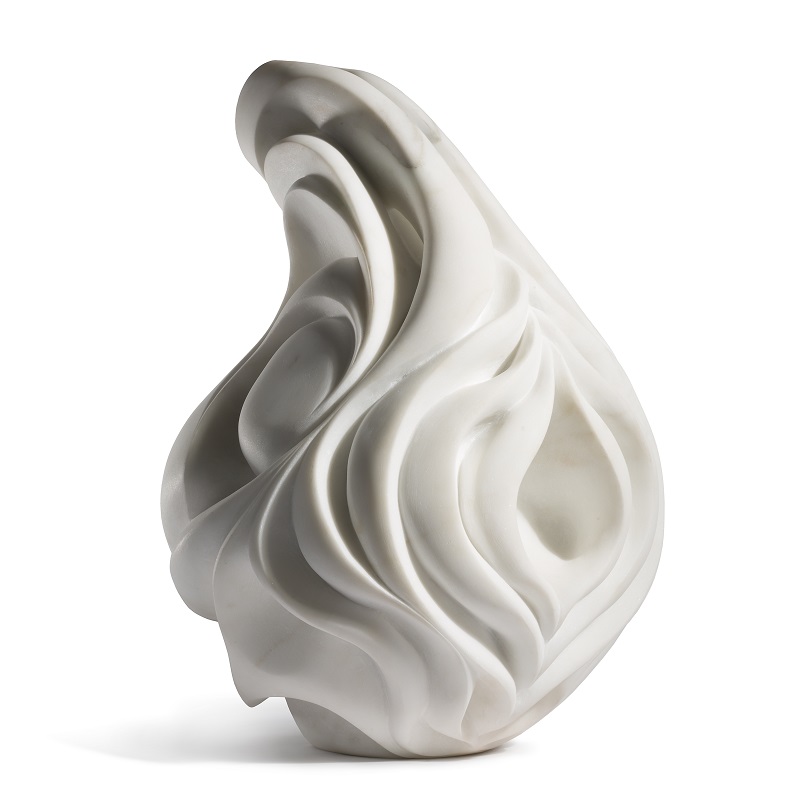 Opening at Watts Gallery in March 2023, Halima Cassell: From the Earth celebrates the career of one of Britain’s leading contemporary sculptors.

The exhibition brings together objects from the artist’s own collection – a number of which are rarely on public display – with new work inspired by Watts Gallery’s founding artists, George Frederic Watts (1817-1904) and Mary Watts (1849-1938), to explore Cassell’s evolving practice over the past 25 years.

Significantly, this will be the first solo exhibition by a contemporary artist at Watts Gallery.

Halima Cassell MBE (b.1975-) was born in Kashmir, Pakistan, grew up in Lancashire and now lives in Shropshire.  A fusion of cultural environments has shaped her identity and underpins her practice.  Called a “foreigner” as a child growing up in Manchester and introduced as a ‘foreigner from England’ when she returned to Pakistan in 2009, through her work Cassell explores what connects us rather than what divides us, finding expression for this in simple forms with complex surface patterns created through deep carving into unglazed ceramic, marble, wood and more.

Introduced recently to Watts Gallery – Artists’ Village, Cassell is drawn to the practice of the Museum’s founding artists, in particular to the life and career of Mary Watts. Cassell identifies much of her own practice with Mary’s: in her choice to work in clay, her choice to create intricate patterns inspired by nature, her shared interest in diverse cultural influences that characterise both their work and in an enduring fascination with architecture which, for Mary Watts, culminated in her creation of Watts Chapel (1895-1898) – the extraordinary Arts & Crafts mortuary chapel, now Grade I listed, conceived as a community arts project and built using Compton clay.

Over a century later and with echoes of Mary Watts, Cassell has created new work for this exhibition using local, Compton clay.  The exhibition opens with this latest work, which includes a commission – the first acquisition by a living artist to join the Watts Gallery Trust collection.  The commission will show the influence of both G F and Mary Watts: the piece’s spherical shape takes inspiration from G F Watts’s The All-Pervading (1887-90) – a version of which hangs above the altar in Watts Chapel – whilst Cassell’s choice of unglazed material, carved pattern, and sculptural form reflects the work of Mary Watts.

This section of the exhibition also looks at how Cassell is part of a lineage of earlier artists who were influenced by world religion and culture, and in particular architectural spaces of devotion.  A maquette made for Reading Museum, inspired by the capitals found in the ruins of Reading Abbey and currently on display in the museum, demonstrates Cassell’s ongoing interest in the intersection of sculptural form, architecture and craft in monumental spaces.

Monographic in concept, highlights of work created throughout Cassell’s career and the influence of her time spent as Artist in Residence in Japan, Pakistan and Pietrasanta, Italy will be the focus of the main exhibition space. Featured will be Virtues of Unity, an evolving installation of exquisitely carved ceramic vessels each representing a country of the world and made using clay from that country. Each vessel is named after a virtue, those which connect all of humanity.

“It has been a delight to uncover the synergies between Halima Cassell and the artist Mary Watts. Despite being separated between time and background, both artists favour unglazed terracotta but have embraced other mediums, blurring the boundaries between, sculptor and potter, craft and fine art. Both women also explore ideas of humanity and the common ground that can be found by all in nature.”

“It is incredibly exciting to see the new work created by Halima in response to Mary’s work at Watts Gallery – Artists’ Village and also to show the latest iteration of Virtues of Unity – a work I believe Mary would have found inspirational.”

“Like Mary Watts, throughout my career I have used spherical forms and vessels reflecting my connections to the earth and the spirituality of the universe. Seeing Mary’s work, I felt instantly connected to her multidisciplinary practice, which reflects my own way of working and her intense use of faceted forms, shapes and patterns drawn from nature and a variety of cultures. I have also found inspiration in our shared passion for clay, a material that allows us to explore the idea that we all come from the earth and we all return to the earth.”

“Halima Cassell and Mary Watts share a fascination with clay and with place. In Halima’s case, clay from different locations that speak to the similarities and nuance, rather than solely the differences, of the ground beneath our feet and notions of ‘where we are from’, and in Mary’s case clay from a seam in the grounds of her home here in Compton, that spoke very specifically to a sense of place and community that she found here in the Surrey Hills.”

“It is a huge honour and fitting that Halima Cassell will be the first contemporary artist to have a solo show here at Watts Gallery. We are very much looking forward to sharing Halima’s work, including new work inspired by Mary Watts, our co-founder who, with her husband the artist George Frederic Watts, established Watts Gallery – Artists’ Village to make art accessible for all.”

“This exhibition celebrates the enduring legacy of Watts Gallery – Artists’ Village and, through art, connects our past with our present, providing a source of inspiration for our future.”

A new book, Halima Cassell: 25 Years of Carving will be available in the Watts Gallery shop to accompany the exhibition.

And coinciding with Halima Cassell: From the Earth, Watts Contemporary Gallery will present its annual ceramics show.  Watts Ceramics: Living Traditions (30 March – 18 June) celebrates some of the best-loved traditions of ceramics and explores how these are being re-invented today, featuring work by nine leading contemporary makers.  Images available here.

A programme of events, including an open studio and ‘In Conversation’ with Halima Cassell, will run alongside the exhibitions.

Halima Cassell: From the Earth opens at Watts Gallery on 14 March (until 18 June).